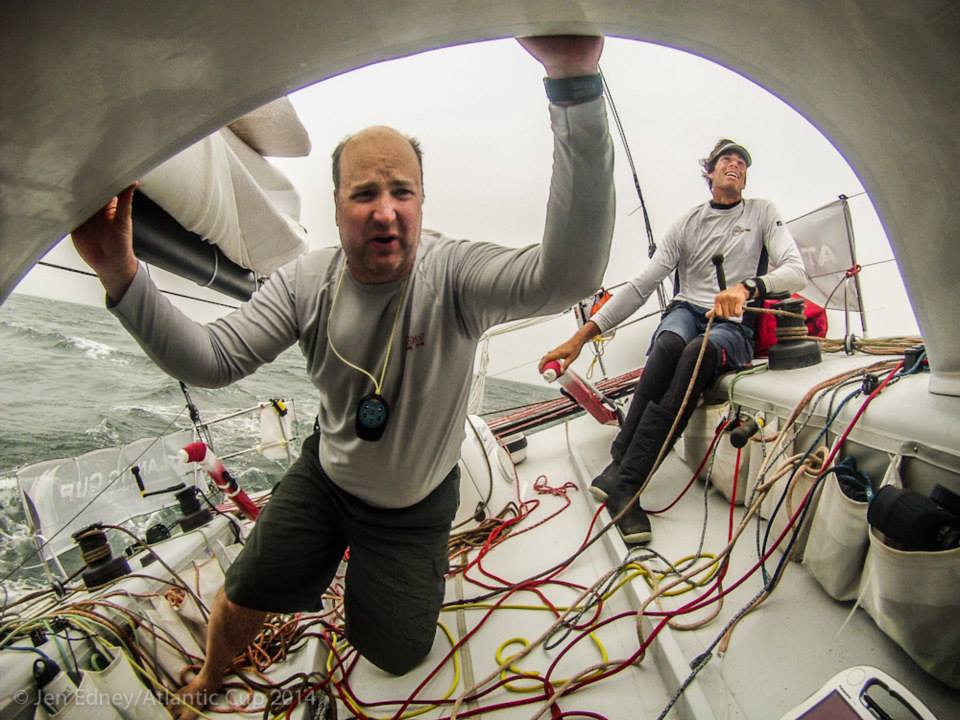 The maxi yachts get all the attention in the marina. But on the racecourse for the Transatlantic Race 2015, from Newport, R.I., to England, the most interesting battle could well be amongst the smallest boats in the fleet.

The six Class 40 yachts entered in the race will compete as part of the IRC Division and as part of their own sub-class, where they’ll race boat for boat across the Atlantic.

“One hundred percent of my focus will be on winning the Class 40 Division,” says veteran Class 40 skipper Michael Hennessy (at right, foreground, during the 2014 Atlantic Cup) who will race his boat Dragon. “The box-rule boats are so closely matched, and the various skippers are formidable enough, that if you place well amongst the Class 40 boats then you are going to do well in the overall fleet.”

The Transatlantic Race 2015 will pit amateur and professional sailors against one of the most demanding racetracks in the world, the North Atlantic Ocean. The fleet will leave from Newport, R.I., in one of three staggered starts from June 28 to July 5, with the finishes, off the Lizard, expected in the middle of July.

In a typical big-boat regatta, 40-foot boats are among the larger boats in the fleet. For the 2,800-mile race from Newport, R.I., to the southwestern tip of England, however, 40 feet is the minimum length. Further adding to the challenge for these sailors is the fact that Class 40 boats are designed to race with a minimum number of people on board. At least four of the six boats will be sailing doublehanded, with just two sailors onboard. The others can sail with a maximum of six. A typical crew for a 40-foot boat competing in such a race would be 8 to 10 sailors.

The Class 40 rule was designed with ocean racing in mind and has become quite popular in Europe, where single- and doublehanded sailing is a professional sport with a devout following. The class rules limit the overall length and width and sail area, mandate a minimum weight, and prohibit some pricier exotic materials. But within that framework, designers and sailors are free to roam and it’s not unusual for Class 40 designs to look quite different from one another.

Despite these differences, the race can be extremely close, even over long distances. In the Transatlantic Race 2011, two Class 40 yachts competed, one double handed, one fully-crewed, and finished just 30 minutes apart.

“Class camaraderie combined with stiff competition is one of the great things about the Class 40,” says Ed Cesare, of Norwalk, Conn., who will be co-skippering Pleiad Racing (below left, sailing in New York Harbor). 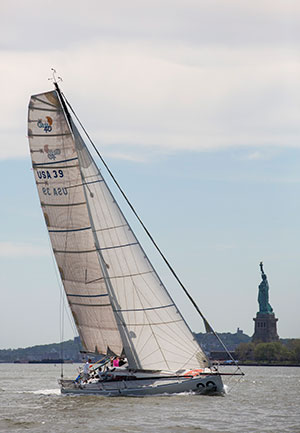 Cesare will be racing across the Atlantic for the fourth time this summer. He’s also done 13 Bermuda Races. “Despite the intellectual and physical challenges of the sport—or maybe because of them—things get pretty simple 1,000 miles from land,” he says. “[Even non sailors] appreciate the passion we have for ocean racing and the fact that we respect the ocean and prepare as well as possible. I tell them ocean racing is risky. I also like to say that the ocean is really forgiving, until it’s not.”

The competition isn’t likely to be even that kind. For the Class 40 yachts, the race could take two weeks, or longer. Winning is all about endurance.

“The keys to success are physical and mental toughness,” says Mike Dreese, of Boston, Mass., the co-skipper of Toothface 2, “team cohesion, an ability to do the unpleasant at the right time, and being resourceful when the inevitable small disasters strike.”

Michel Kleinjans (Antwerp, Belgium) is a veteran of five transatlantic races and was more circumspect in his response when asked about what it will take to get his entry, Visit Brussels, to the finish in first place. “Keep on pushing to the other side,” he said. Sage advice for such a daunting undertaking.