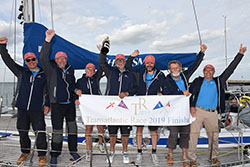 COWES, England – The Transatlantic Race 2019 will go down as one of the slowest on record, but for none was it more drawn out than for Constantin Claviez and his crew on Charisma. The German skipper and his trusty 1980 vintage Swan 441, which he has campaigned for the past 20 years, arrived in Cowes this afternoon after a slow day spent crossing Lyme and Christchurch bays in light winds before bucking a powerful ebb tide exiting the western Solent.

Charisma finally crossed the Royal Yacht Squadron finish line off Cowes at 16:47:00 UTC. Her elapsed time of 23 days, 1 hour and 37 minutes was some 5d:15h:39m after the previous arrival, Mark Stevens’ Hinckley 50 Kiva last Friday. Charisma’s time this year was some 4d:6h:31m slower than it took her in the Transatlantic Race 2015.

As has been the case for everyone in this year’s Transatlantic Race, Charisma’s crossing was one of light conditions. But her crossing was made worse when the crew just missed a band of southerly winds, the transatlantic express train that the group immediately ahead of her was able to ride until it ground to halt negotiating the high pressure bubble off southern Ireland.

“We had very difficult weather for the crossing and it was quite difficult to pick up the right winds,” explained Claviez, the 56-year-old lifelong sailor from Hamburg. “We lost the wind and it was getting hard to get new wind. Sometimes it was running away from us.”

Charisma initially lost ground on the second night. “There was absolutely no wind and a very bad Atlantic swell,” Claviez explained. “The sails were knocking against the rig and we were worried that there was going to be some damage. The sails and rig had to take us for another 3,000 nautical miles and to damage them at that point made no sense. So we dropped them and waited for the wind to fill in. But we were drifting backwards a little that night.”

Ironically, this was after the first night when, south of the Nantucket Shoals, they experienced the most wind all race – 30 knots with occasional gusts of 34.

Falling behind her IRC 3 rivals, Claviez drove Charisma south, a move that took them from being 100 miles behind approaching the southwest corner of the Point Alpha ice exclusion zone to halving this by the time they reached its southeastern point, just over one week into the race.

For Claviez this was possibly the most pleasing moment of the race. “We picked up the eddies from the Gulf Stream which pushed us in a good direction. Using our navigation software, we tried to optimize our course to make the most use of those. From our information, the eddy went clockwise around, so we went southeast before we went east and then east/northeast. We were satisfied with our performance there.”

Clearing the ice exclusion zone at around the same time as SHK Scallywag was having its champagne moment after claiming line honors in Cowes, Charisma stayed south of the great circle where Claviez hoped they would find better wind. However, at this point their IRC 3 rivals were streaking ahead of them in southerly winds while Charisma was wallowing behind. To make matters worse the weak front those ahead were enjoying wasn’t strong enough to blast the high pressure out of the way and, to add insult to injury, Charisma was also forced to detour north from the great circle, towards Ireland to get around the top of the high or risk being becalmed completely.

“We never stopped completely, but sometimes we were going very slowly. You needed a lot of patience—it was difficult to get through there,” said Claviez, bemoaning the lack of the strong winds in which his Ron Holland-designed yacht typically excels.

Aside from playing the Gulf Stream to perfection, the only other moment of the race where Mother Nature smiled on the German crew was in the English Channel. On Tuesday the high pressure finally moved away and Charisma was the only yacht in this year’s race to enjoy 20-knot following winds propelling her up the Channel. “We picked up some nice wind from the Scilly Islands and passed Lizard Point under spinnaker accompanied by dolphins,” recounted Claviez.

They took the spinnaker down after a sheet broke and spent Tuesday night under genoa. Then the wind dropped some more and they hoisted the light air spinnaker and made good progress past Portland Bill.

However, the wind continued to drop and this morning Charisma was crossing Christchurch Bay making 3 knots through the water against 1.5 knots of tide. As Claviez reported: “Yesterday it was good to put the frustration of the light winds away, but the frustration came back… We lost the wind completely; all the other boats around us were motoring!”

Through Claviez’s prudence, born of his 230,000-plus sea miles, Charisma completed the Transatlantic Race 2019 with both boat and crew unscathed. “We still have food, water and drinks. In Newport we knew that sometimes it can be longer or shorter. This time it took longer. Yesterday we ate our last eggs. We have baked some bread. We have had potatoes, noodles, fresh pasta. Until today we had oranges, so we have had a nice breakfast. No one has starved. The only thing starving was the wind!”

His crew of Stefan Eschenmoser, navigator Karl Hoeftberger, Uta Leukroth, Bernd-Joachim Proelss, Horst Sablotny and boat captain Gerd-Walter Siefert were highly proficient, most with multiple Atlantic crossings behind them. For example, Claviez has done two crossings before with Hoeftberger and this was the fourth crossing for Siefert. Personally, this was Claviez’s 16th trans-Atlantic. “All of this crew are very experienced and very good,” he said. “There is a very good community on board and enough good cooks. We have had plenty of nice food to lift our moral!

“We have an experienced crew, but we’ve never had so much light winds like we’ve had this time. For us it was very difficult and for the other boat, they got the better wind earlier than us and held it for longer than us. So that is why there was such a big difference in our time compared with the other yachts.

“Everyone has done their very best,” Claviez continued. “We are still in a good mood. It has tested our patience a little, but you have to be patient because you have no option.”

The prize giving for the Transatlantic Race 2019 will take place at the Royal Yacht Squadron on July 31.