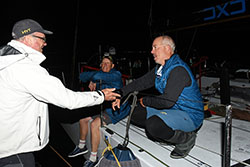 COWES, England – In the early hours this morning, British time, a familiar VO70 shape ghosted across a pitch-black Royal Yacht Squadron finish line off Cowes, Isle of Wight. David and Peter Askew’s Wizard arrived home second in the Transatlantic Race 2019 at 00:31 UTC with an elapsed time of 10 days, 9 hours, 1 minute and 42 seconds.

Wizard and her crew have great pedigree, their steed being Franck Cammas’ 2011-’12 Volvo Ocean Race winner Groupama 4. Since acquiring her in 2017 for the Rolex Sydney Hobart Race, they have won the 2018 Newport-Bermuda Race and earlier this year the Royal Ocean Racing Club’s Caribbean 600. Of the two finishers so far, the American VO70 is the present leader under IRC corrected time.

“The race was a lot of fun,” recounted 54-year-old David Askew, after dousing the crew in champagne. “There was a bit of everything – a lot of different types of weather conditions. The crew worked really well together.”

His 52-year-old brother Peter added: “We had four days of reaching along in 25 knots of breeze, that was good fun and we clipped off some pretty good miles. It started off slow so to get some miles behind us was welcomed at that time, because we’ve had a pretty slow race over the last two days.”

Both enjoyed their stop-start real time battle with the 100-foot maxi SHK Scallywag for line honors. David continued: “Early in the race a lot of tactical decisions needed to be made around the Gulf Stream. I had no idea that that would feature so much. It helped us get ahead of SHK Scallywag, by just picking a better lane through than they did. They were almost 80 miles behind us, but then they ran us down and passed us and then the low overtook us and they had some problems and we got about 100 miles ahead again. They didn’t pass us again until 1100 UTC yesterday.”

The brothers who herald from Grosse Pointe, Mich., but have since moved to Maryland (Peter) and Utah (David), have sailed all their lives and are now trying to tick off the world’s major offshore races. They plan to continue this season with the Rolex Fastnet and Middle Sea races. But the Transatlantic Race 2019 was their biggest yet.

“The whole thing was a highlight. It was a great race, a lot of fun,” said Peter of the experience. “I was expecting it to be much colder, so that was a pleasant surprise. The last third of the race was the coldest.” 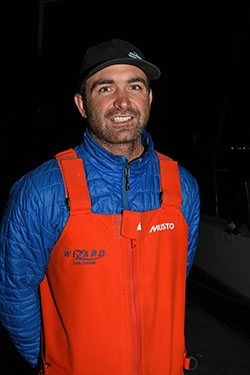 On board, because the crew is relatively short-handed, the brothers stand watches. “We have to do whatever we have to do to keep the boat going,” explained David.

With them was Oxley, the navigator who always seemed to put them in the optimum part of the ocean for the given, and at times challenging, conditions. They were supported by an all-star cast including Volvo Ocean Race winners Clarke, Greenhalgh and Harmer.

Crew boss was Volvo Ocean Race skipper Enright, who won the Transatlantic Race 2015 aboard Bryon Ehrhart’s Reichel/Pugh 63 Lucky. “I was surprised how long the race was, although we didn’t park up until the last 24 hours,” the 34-year-old Enright said. “A lot of distance was sailed. A race that is supposed to be 2,900 nautical miles turned into much longer, but that’s how it goes. It wasn’t unexpected with the conservative ice gate.”

During the race the most wind they saw were a few 30-plus-knot gusts ahead of the front in which they clocked their highest 24-hour run of 492 miles. On their boat they suffered no major issues for which Enright praised Maxted, the captain.

Following Wizard, there is set to be a long wait for the next boat, which should be Clarke Murphy’s 82-footer Aegir, but possibly not until Tuesday. Navigator Mike Broughton reported: “This is by far the lightest Transat and it feels like 90 percent of it has been done under cloud and has been pretty cool, despite the high pressure. We are still wiggling our way east to escape the high pressure.”

This morning Aegir was still some 230 miles due west of the Fastnet Rock off southwest Ireland with Land’s End 385 miles away.

Meanwhile, growing ever larger in Aegir’s rear-view mirror is Eric De Turckheim’s 54-foot Teasing Machine, which has taken the most extreme detour around the north side of the high pressure, having to cover more miles but sailing much faster. This morning Teasing Machine had closed to just 37 nautical miles astern of Aegir, having sailed 264 nautical miles in the last 24 hours compared to Aegir’s 179.

Behind them, on Giles Redpath’s Lombard 46 Pata Negra, there were celebrations for crossing the “1,000 mile to go” mark. They also celebrated a new speed record for the boat, 21.04 knots, which they coaxed out in the big winds of the frontal system they’ve ridden the past four days.

“Yesterday saw the last of the higher winds and the added swell made for great surfing conditions,” reported Chris Hanson. “We were joined by a pod of dolphins in the night which glow like a salvo of torpedoes as they zoom along besides us. It was an amazing sight.”

Ahead the forecast for the mid-fleet remains unexceptional as they will continue their laborious track around the top of the high, with the wind around 10 knots from the northwest tomorrow, the movement of the top of the ridge forcing them ever closer to the Irish coast to remain in the breeze.

Meanwhile the rear part of the fleet will continue to press on along the great circle, hoping that the high ahead of them, which the mid-fleet is having to skirt, will finally get shoved south enabling them to continue their direct track towards Land’s End. At present the forecast indicates the direct route not opening up until Wednesday next week.