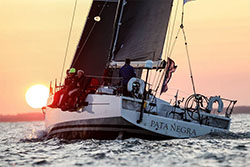 NEWPORT, R.I. — The Transatlantic Race 2019 continues to be a slog upwind for the 13 boats racing towards Cowes, Isle of Wight, England.

Aside from the three lead boats, who this afternoon were in following winds on top of a low pressure, there have been scant few opportunities to put up fuller, off wind sails as the wind has mostly been forward of the beam.

At today’s 1230 UTC position report, David and Peter Askew’s VO70 Wizard had moved into the overall lead on the water after overtaking David Witt and the supermaxi SHK Scallywag, which had been leading since Tuesday’s start.

An hour later, at the 1330 UTC report, Wizard had maneuvered back to starboard to cover SHK Scallywag and was making 14.9 knots while SHK Scallywag was sailing at 2.9 knots.

Presumably, Wizard  is enjoying some benefit from the Gulf Stream as it is farther south than SHK Scallywag. That could also be contributing to the great speed difference between the two yachts. Wizard was about 335 nautical miles from waypoint A3, the southeastern marker of Point Alpha, the ice limit zone. Once past that waypoint the course opens up and they’re free to sail a more northeasterly course towards England.

Life onboard many of the yachts has been uncomfortable as they sail upwind and contend with eddies spinning off the easterly flowing Gulf Stream current. Water temperatures are being reported in the high teens to mid-20s Celsius, which is nice for the crew but creating a choppy sea state against the winds blowing anywhere from the east to the south.

“It’s been a tough battle upwind,” said Chris Hanson from the Lombard 46 Pata Negra (top photo). “We’ve had 20 to 25 knots of wind on the nose since the start and the sea state feels like North Sea chop. It’s been very choppy, not the long waves you imagine when thinking of ocean racing. It’s been somewhat unpleasant, as things are flying around and we’re having to tidy up a fair bit.”

Hanson said they did a good job of playing the Gulf Stream yesterday and at one point had up to 6 knots of favorable push. Indeed, Pata Negra made nice gains yesterday once it tacked south of the rhumbline, where it had sailed most of the first two days.

“We’ve been watching the race tracker and nearly did what Teasing Machine did, going south of a depression, but we decided against it. It was too far to go. We’re not as quick as they are,” Hanson said.

Eric de Turckheim’s Teasing Machine and Jean-Pierre Dick’s The Kid both dove south on Wednesday to get under a low-pressure system. Yesterday, Laurent Pagès from Teasing Machine noted that they weren’t sure it was the right move.

“It’s been difficult to find good information,” said Dick, who’s circumnavigated the globe six times either singlehanded or doublehanded. “We made some strategy error yesterday and now Pata Negra is ahead of us. It’s something we should correct soon.” 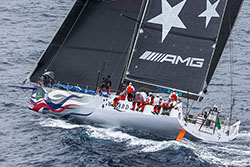 Hanson said that Pata Negra is mostly handling the conditions with ease, except for the loss of one critical piece of equipment.

“The forward head on the port side took the brunt of slamming upwind,” Hanson said. “It has detached from the boat and is out of service for the rest of trip. Apart from that, we’ve had a number of headsail changes and no spinnakers yet at all.”

Dick had his own problems on The Kid from the sloppy seaway.

“We haven’t had any big issues with the boat. She’s been performing well,” said Dick. “We had a very confused sea state the other day when chasing the Gulf Stream and the computer mount broke and the computer went crashing. But it’s OK. The boat’s doing well now. She’s fine, just needs attention.”

Dick related how last night the moon popped out last night for the first time since the start. “It was beautiful. We were going fast with The Kid. It was a unique moment,” he said.

“This morning began with a gorgeous sunrise and moonset, the first we've seen since the clouds have finally lifted. Mild weather and blue skies lifted all of our spirits and prompted some good story telling,” said Caitlin Murphy. “A couple pods of dolphins have been following us for the past few days, circling to come say 'Hi' every few watches and making for some great entertainment! At night, the most incredible part is watching them swim through the phosphorescence, leaving their own glowing wake.”

The fleet was reduced to 13 last night when Joe Mele’s Triple Lindy officially withdrew from the race. Triple Lindy had returned to Portsmouth, R.I. on Wednesday evening to replace a burned-out alternator. Skipper and crew restarted the race from Castle Hill Light at 0405 UTC on Thursday morning, but withdrew last night when Mele had to return home to New York for a personal emergency.