NEWPORT, R.I. (July 2, 2015) – With two staggered starts down, there is just one to go for the 2,800 Transatlantic Race 2015, and it is for the largest and fastest boats: the monohulls Comanche and Rambler 88, at 100 feet and 88 feet in length, respectively, and the multihulls Phaedo3 and Paradox, at 70 feet and 63 feet. All four vessels will rendezvous off Castle Hill Lighthouse on Sunday, July 5, with the multihulls scheduled to cross the line at 2 p.m. and the monohulls to follow a short while later. Currently, 32 other teams are headed to the race’s finish at The Lizard, having similarly started on either June 28 or July 1; the fleet numbered 38 originally, but Windfall withdrew prior to the second start and Privateer retired, due to technical issues, shortly after the second start.

The showdown between Comanche and Rambler 88 has been anxiously awaited since both boats were launched as new designs late last year. Both are development boats, and both harbor secrets in their designs; however, Rambler 88’s very recently added side boards are the latest talk of this Newport sailing town, and the team’s tactician Brad Butterworth said they were “a big call, especially when the boat is brand new.” The side boards are mostly for reaching and running, to help lift the bow out of the water, and it is hoped that Sunday’s start will allow a sneak preview of their power.

“It will be quite good fun, and we have a good group onboard,” said Butterworth, mentioning Volvo Ocean Race veterans Stu Bannatyne and Brad Jackson as well as a number of alumni of the Alinghi America’s Cup team as members of Rambler 88’s crew. And no one is more experienced in ocean sailing or committed to wringing every ounce out of Rambler 88’s design than owner George David himself, who steers the boat and was doing so when Rambler 100 established the record for this race (6 days, 22 hours, 8 minutes and 2 seconds) in 2011. 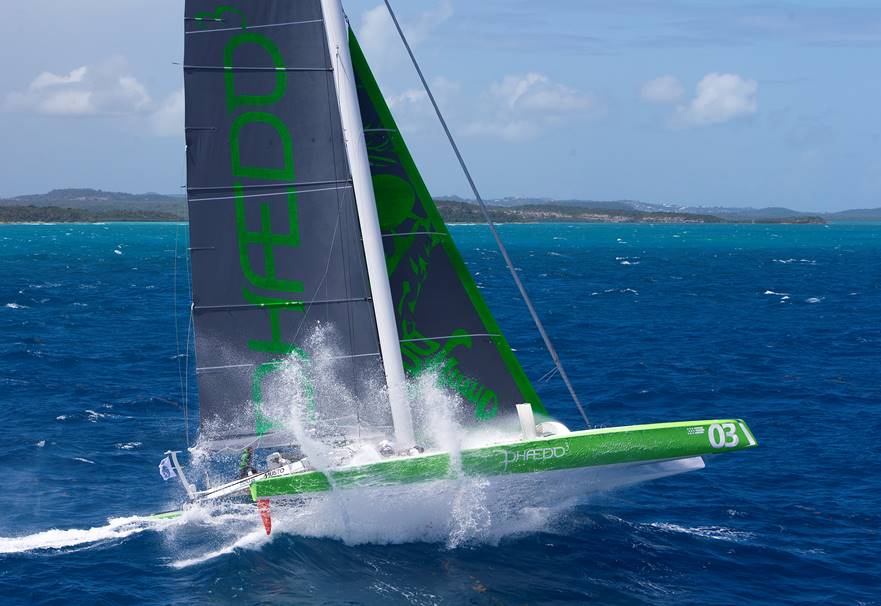 Breaking that record is the goal of both monohulls, but Comanche navigator Stan Honey says it isn’t looking promising. “It looks light for us,” he said yesterday. “It’s a bad weather pattern for fast boats –a high pressure ridge that we’ll be butting into all the way across.” He added that if there is something positive to say, it’s that he’s talking about the North Atlantic where things can turn around if there is any change to the timing or structure of that ridge. “As the time gets closer, the model works better,” he said, estimating at least nine days for their passage if conditions remain the same as he quoted.

As for all-out speed, PHAEDO3 has been on a roll as of late, posting new speed records in a multitude of events, the team’s favorites being the RORC Caribbean 600 and the Guadeloupe to Antigua passage, the latter in which the boat averaged 28.95 knots. Coming back from Nantucket yesterday, PHAEDO3’s owner/skipper Lloyd Thornburg said he briefly saw 39 knots of boat speed, “but this race will be less about top speeds and more about keeping the boat moving for high averages.” He added, “We are hoping to make a fast run out of whatever weather we are given; however, the magic weather for a really, really fast run does not appear to be in the cards at the moment.”

Full list of entrants and their respective race starts: http://bit.ly/1BDPZcm

Follow the Race
Local Vantage Points – Prior to the start of the TR 2015, many of the race boats will be making last-minute preparations at Newport Shipyard. Spectators are welcome to view the boats there and can enjoy a casual meal dockside at Belle’s Café (metered parking is available on Washington Street and the city parking lot is located across the street).

The best vantage point for watching the next two TR 2015 starts (scheduled for Wednesday, July 1 and Sunday, July 5) is at Castle Hill. The yachts should be in the vicinity of Castle Hill Light at least an hour before the 1:50 warning signal and can be seen from the Jamestown shore as well, and then from Newport’s Brenton Point and Jamestown’s Fort Wetherill and Beavertail State Park as the fleet heads from the East Passage into Rhode Island Sound and on their way across the Atlantic.

Yellowbrick Tracking on tablet or smart phone – You must first download the YB Races app, then within the app, add the TR2015 race. There is no charge to follow this race. Apple iTunes https://itunes.apple.com/us/app/yb-races/id452193682?mt=8, Google Play/Android https://play.google.com/store/apps/details?id=com.yellowbrick.raceviewer&hl=en