Sailing Heavyweights To Battle Across the Atlantic in 2015 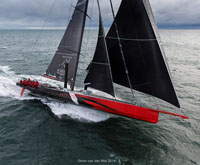 Comanche. Photo by Onne van der WalAs the skipper of two successful race boats named Rambler—90 and 100 feet long, respectively—George David has been the favorite for line honors in most of the long-distance yacht races he has entered during the past decade. But this will change next July when David skippers his third Rambler, a soon-to-be-launched 88-footer, in the Transatlantic Race 2015. The boat could well be faster than either of his two previous yachts. But, in terms of raw speed across a range of conditions, David’s boat will find itself looking up at Jim Clark’s 100-foot Comanche [right, off Newport, R.I.], which will be skippered by two-time Volvo Ocean Race skipper Ken Read.

This time, as David notes with a smile, "We're the little boat."

The Transatlantic Race 2015 will start from Newport, R.I., in late June and early July of 2015 and finish some 2,800 miles away, off the southwestern tip of England. The race, which was last sailed in 2011, is being run by the Royal Yacht Squadron and New York Yacht Club in association with the Royal Ocean Racing Club and Storm Trysail Club.

An international field of more than 50 boats from 40 to 290 feet in length is expected to take part in the 2015 race. A handicapping system will afford each yacht, regardless of speed potential, the opportunity to compete for overall honors.

"The fleet is more than double what we had in 2011 race, and there are plenty of high-profile competitors," says David, who is also serving as the co-chairman for the event. "An ocean race such as this spreads the fleet out over multiple weather systems. Anyone can win."

Distance races usually recognize two winners: the one who has the fastest corrected time and the one that sails the course in the shortest elapsed time. Comanche was built with only the latter goal in focus.

"Comanche was designed to leverage advanced technology in monohull boat design, and hopefully break some records with the result," says Clark. "If it's successful, we hope to hold these records until someone builds a better boat with later technology. The design is pretty radical, very powerful."

This is not the case for Rambler, says David: “We’re paying attention to two things: speed through the water and results on handicap. The new Rambler has been optimized for IRC [a rating rule that will be utilized by the race] and that’s one reason we like having 12 less feet of waterline length.”

Crews of both boats are in for a wild ride. The North Atlantic is one of the toughest stretches of ocean to cross, and the Transatlantic Race 2015 is one of the most daunting races on the grand prix yachting circuit. Read, who has twice rounded the fabled Cape Horn during the Volvo Ocean Race, was unequivocal in his assessment of the challenge of sailing the modern breed of no-holds-barred raceboats.

“This is not a ‘been there, done this before’ boat,” says Read, the president of North Sails. “Comanche is out there. It’s going to scare the crap out of you. Then there will be times when you’ve got the biggest smile on your face, and a lot of time somewhere in between. This is definitely a little different. It’s not a 50-knot flying multihull in San Francisco Bay, but it might be a monohull equivalent to that.”

With the potential to exceed 40 knots of boatspeed in the right conditions, these yachts are often sailed on the edge of control. Aside from keeping the sailors and boat in one piece, a crew that knows when to push, and how hard, is the key to victory.

“The ability to have good group of guys that can let the boat do its thing, unless we're sailing in conditions where it needs to be held back, is crucial,” says Read. “Comanche is no different from any other boat, people make it by making the design, engineering and sailing decisions, and deciding how to position it relative to the other boats. It’s an amazing tool, but at the end the day it’s all about people.”

For David [center, with some of his line-honors-winning crew from the 2011 Transatlantic Race], successfully campaigning a boat like Rambler shares much in common with the business world. “You have all the same elements: organization, planning, people, design, strategy and tactics, and the rules,” says David. “But in business, it can take years before you see the outcomes. In a boat race, you win or lose in a much shorter time frame. It’s like a year in business compressed into a couple of days.”

With a lot of seawater, adrenaline and sleep deprivation thrown into the mix.